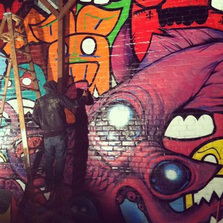 Basic Lee is a world class all around artist from the bay area, that specializes in a variety of styles with mediums that ranges from painting to spray paint. Influenced by life's constant struggles and the beauty of the natural and the spiritual that surrounds us with limitless imagination and style that reflects his vision to a higher level.

His versatility with his style of urban pop surrealism has made him an elite underground artist amongst his peers. His method of work is defined as a variety of apocalyptic variations of somber reality to dark filled fantasies that leaves the viewer constantly thinking in mystery through the projection from his creations.

Influenced by traditional roots, homegrown folklore, urban  lifestyle, comic books and Saturday morning cartoons, His style started to evolve naturally when he got into graffiti during his younger years inspired with the passion of music and the hip-hop culture from it's truest form.